For more than 25 years, Dub Taylor has helped advance cost-effective, clean energy technology and policy through his work in the public sector. First, with the Texas Railroad Commission’s Alternative Fuels Research and Education Division, then leading the Texas State Energy Conservation Office under three State Comptrollers.

Matt Welch, State Director of CTEI, said, “we are incredibly fortunate and very appreciative that Dub is joining our organization. His institutional knowledge of energy policy in Texas is a tremendous resource and will be invaluable in the future.” 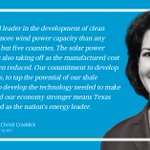